Sometimes, the little stories are the gems

Posted on February 5, 2015 by susiequinn

Ever since I learned how to write, I’ve wanted to tell stories. That’s what has kept me going for the past 28 years as a community news journalist. I love the fact that my job is not 9 to 5. I get to ask as many questions as I want, because it’s my job to do so. If I’m curious about something, my press credentials give me leave to find answers. I also get to meet some incredible people, and do some pretty awesome things. This week, I followed British Columbia’s 29th Lieutenant-Governor, Judith Guichon, around the Alberni Valley as she visited a gymnasium full of enthralled elementary school children, took a ride on Port Alberni’s famed steam train and received a walking tour of McLean Mill National Historic Site. She also visited the Tseshaht First Nation to open a new subdivision on the reserve, visited seniors at Echo Village and attended a reception at the Hupacasath First Nation House of Gathering. She had previously spent two days touring Ucluelet and Tofino on the West Coast of Vancouver Island. 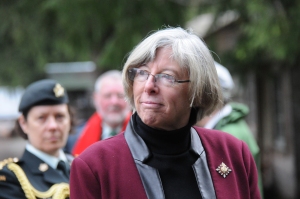 Her Honour was sworn into her appointed position on Nov. 2, 2012. Prior to that she owned and operated Gerard Guichon Ranch Limited in the Nicola Valley. She is a down-to-earth person who loves her province and has resolved to visit “every valley” in B.C. before the end of her five-year term. Guichon is the third Lieutenant-Governor I have met: David Lam was the first, when I was a Pathfinder; Iona Campagnolo the second, when I was working with the Comox Valley Record (she lived in the Comox Valley). It was an honour to spend some time following her on her tour; but meeting her was not my highlight this week. Meeting John B. Mager, her chauffeur, was. 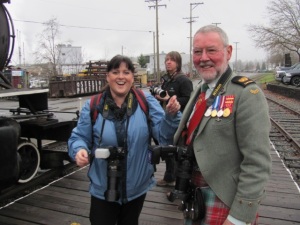 John Mager, chauffeur to the lieutenant governor and a pipe major, before taking a trip on the Alberni Pacific Railway’s steam train. (David Hooper photo)

John Mager is a pipe major (“Now look at this, I’m a pipe major and I’m a Mager,” he said as he handed me his card) and wears his Scottish plaid (I think he said he was with the Seaforth Highlanders, but don’t quote me on that) at the events where he also pipes in the Lieutenant-Governor. 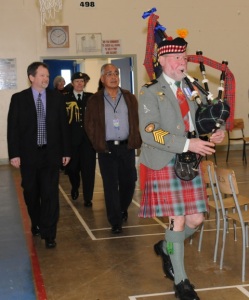 John B. Mager pipes in local dignitaries and Lt.-Gov. Judith Guichon during an appearance at Alberni Elementary School, Feb. 2, 2015. 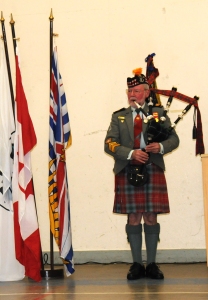 John B. Mager wrapping up his piece of music in the Alberni Elementary School gym, Feb. 2, 2015.

He is also the website photographer (he’s a fellow Nikon user) for Government House when the bagpipes and car keys are put away. Mager loves his job, which is a very good thing: he’s been doing it for 33 years. “This is my seventh Lieutenant-Governor,” he said. When he began his job, Henry Pybus Bell-Irving was the lieutenant governor. Then followed  Robert Gordon Rogers, David Lam (first Asian Lt.-Gov.), Garde Gardom, Iona Campagnolo (first female Lt.-Gov.), Stephen Point (first aboriginal Lt.-Gov.) and now Guichon (“I guess I’m the first rancher,” she told students at Alberni Elem.). Mager lives in the coachman’s cottage beside Government House, so he is close by. I wish I had had more time to talk to Mager; he has an ebullient personality, and I didn’t see him without a smile on his face, even when walking through the chilly mist in his kilt at McLean Mill. I’m looking forward to the next time I get a chance to visit with him. 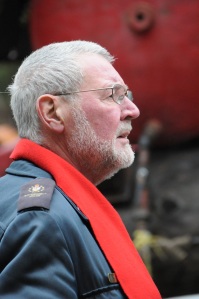 I'm a journalist with a pen, notebook, camera and pilot's licence in my toolkit, and a passion for telling people's stories.
View all posts by susiequinn →
This entry was posted in Uncategorized and tagged Alberni Valley, John B. Mager, John Mager, journalism, Judith Guichon, McLean Mill National Historic Site. Bookmark the permalink.