Why do you give? 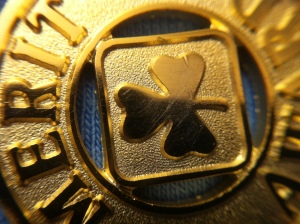 In June 2014 I was presented with a Gold Merit Award on behalf of Girl Guides of Canada. I am humbled by this award because I was nominated by my peers.

The question came up in a passage in a novel, of all things. The characters were discussing personal contributions to a charitable event and became introspective about their intentions.

I stopped reading the page, set the book down for a few moments and thought, Why DO I give?

Volunteerism has always been a way of life for me, and I have my parents to thank.

I grew up watching my parents volunteer. I remember my father was a member of the Lions Club when we lived in Brighton, Ont.; my mom wore the Lions’ mascot costume in a parade downtown one year.
My mother swam with special needs children and teens when we lived near Ottawa, Ont. She became a Girl Guide leader after enrolling her daughters in Brownies.
In later years, they both became heavily involved with the BC Transplant Society while my father was waiting for a heart transplant, then he and a fellow transplant recipient started Heart Transplant Home Society to give others a safe place to live while undergoing treatment for transplants at St. Paul’s Hospital in Vancouver.
From there they became involved in the Gift of Life dragon boat team, and my mom continued with them after my father’s death.

I learned at my father’s funeral that he did the books for a musical society in the city where he lived; although I knew he loved music, especially show tunes, I had no idea.
I’m sure there are many things they were involved in that have slipped my memory, but these came immediately to mind.
My parents instilled the volunteerism quality in my sister and I. I have been involved with Girl Guides of Canada for 40 years (when they wouldn’t let me be a girl participant anymore I became a leader, where I could continue to play, laugh, camp and grow, only this time they put me in charge of other people’s kids).

In the course of my career as a journalist I have volunteered for the B.C. Winter Games, B.C. Special Olympics, ground search and rescue, spoken to numerous classes and given a handful of workshops on everything from photography to how to write press releases. I read in classrooms during an annual literacy event in Cumberland, and am hoping to do something similar in Port Alberni.

I joined our local flying club and a year later was nominated to the board of directors. I’m still feeling my way along the position.

I open my wallet when I can afford it and have certain charities I support financially.

Why do I give?

With Girl Guides, it’s easy: besides the service aspect within the organization itself, I had some awesome leaders when I was growing up who made sure I learned stuff, travelled places, and gained self-confidence along the way—all disguised as fun. It’s my turn to give back.

(OK, some of the Guiding is purely selfish: where else can I get my hands dirty playing with cornstarch and hair conditioner making playdough, or mixing Coke with Mentos to create explosions? In exchange I make sure the girls learn cool stuff, do some camping, learn some skills and challenge themselves.)

My wallet is not fat: but every dollar helps.

A quote in the same novel, by Margaret Mead, has stuck with me: “Never doubt that a small group of thoughtful, committed citizens can change the world. Indeed, it is the only thing that ever has.”

Why do I give?

I'm a journalist with a pen, notebook, camera and pilot's licence in my toolkit, and a passion for telling people's stories.
View all posts by susiequinn →
This entry was posted in Uncategorized and tagged BC Transplant Society, charities, Gift of Life, Girl Guides of Canada, giving, Heart Transplant Home Society, volunteering. Bookmark the permalink.