Posted on September 7, 2012 by susiequinn

Something I never got used to when I lived and worked southern Alberta were the storms.
In the winter, we’d get a snowstorm followed by a warm chinook wind; the temperature could range 20 degrees in one day. I didn’t mind the snow or the warmth separately, but when the temperature rose that much it melted everything, then flash-froze it later that night, creating a slick skating rink in the puddles. I don’t know how many times I slid right through the stop sign at the end of the parking lot access at the Medicine Hat News the first winter I lived in Medicine Hat.
Sitting in the press box at Athletic Park and covering the Hat Blue Jays was interesting during hailstorms. The roof on the press box was tin, and the hail made a horrendous noise. 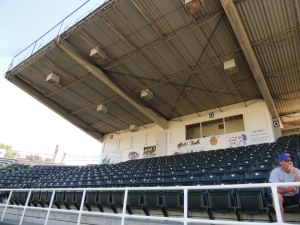 The roof over the press box at Athletic Park was tin and made a heck of a noise during a hailstorm. Despite a new coat of paint, the press box (left, with windows shuttered) and scorekeepers’ booth look the same as they did 20 years ago.

The worst storm I ever saw pass through, I watched approach the city as I was pitching during a women’s slo-pitch game. I didn’t normally pitch, but we weren’t exactly a premier team, and had exhausted our other resources so the task fell to me.
I watched the sky behind the backstop turn various colours, like a bruise forming over the horizon. The wind picked up. When the hail started falling, I didn’t even wait for the umpire to call time, I made a run for the dugout.

When I was in Calgary for the Va’a World Outrigger Sprint Championships in August, I was crossing my fingers that we wouldn’t get hit with one of the rain and hailstorms the region was famous for. We avoided a big storm early in the week, although highway overpass signs were blowing away in the strong winds in Red Deer.
But our luck ran out the second-to-last afternoon. The clouds started forming over Glenmore Reservoir; the wind picked up. It began spitting a little bit of rain. Paddlers put on jackets and sat underneath trees, as those who were waiting for their races to begin hoped that they would be able to finish before the storm broke.

Ominous storm clouds gather over the Glenmore Reservoir in Calgary.

Judy, Erin and Sheila find a tree for shelter when the rain starts. Then decide with the thunder and lightning, it’s probably not a good idea to stay under the tree!

Suddenly, it got really dark despite being 3 p.m. The wind kicked up so hard people were having a hard time standing upright. There was lightning, and a couple of cracks of thunder. The sky opened and the rain pounded the pavement, running in a river down the hill toward the reservoir. 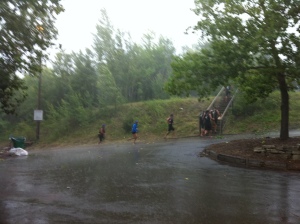 It rained so hard the water was running down the pavement in little rivers.

There was a race on the water and the storm gave paddlers extra incentive to finish up. Volunteers raced to secure tents, restore power and help people take cover. The doors to the boat shed were opened to allow people huddled under the building’s overhang to take refuge.

Members of the men’s team from Petaluma, Calif., take refuge in the boat shed after their race was cancelled.

The wind blew all the course markers askew, forcing organizers to cancel the event for the day with just three events left (including that of the men from Petaluma, Calif., who some of the Canadian women had befriended).

Within an hour the temperature had dropped from 23 degrees Celsius at the Calgary International Airport (where official temperatures are recorded) to 11 degrees. Soon enough, the wind blew the clouds further east, and sucker holes of blue sky peeked through the rain.

Ninety minutes later, except for the deserted race site, you’d never have known a storm had blown through.

Yep, a typical prairie storm. Thought I’d left them behind.

I'm a journalist with a pen, notebook, camera and pilot's licence in my toolkit, and a passion for telling people's stories.
View all posts by susiequinn →
This entry was posted in Uncategorized and tagged 2012 Va'a Outrigger World Sprints, Medicine Hat, Petaluma, prairie storms. Bookmark the permalink.